From which cheese is made 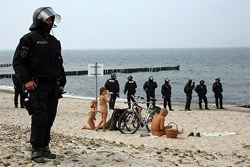 Well it’s being reported on Indymedia (and unsurprisingly nowhere else in the UK media) that thousands of G8 protestors have broken through the first wire-cordon and breached security measures to reach the main perimeter fence (albeit still 6km from the centre).
So while the TV shows propaganda shots of leaders meeting and pointing into the middle distance, it’s heartening to know that some folks out there are at least managing to express the collective roar of discontent which seems so necessary right now. And apart from anything there are a striking set of images of protest and determined resistance being produced. 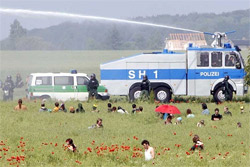 I hope to goodness some of this news gets out, and that the agenda of the protest groups is intelligently articulated but experience suggests that this will just get hushed up or, if trouble occurs, demonised.